The buttock lipofilling or the Brazilian butt lift is an intervention that aims at enlarging the volume of the butt by using the patient’s own fat rather than the implants. This relatively new technique reshapes the silhouette and offers a better shape to the buttock. It is recommended when the patient wishes to make a discrete augmentation in the volume of the buttock at a competitive price. But to benefit from a more obvious enlargement the patient must in this case opt for buttock augmentation with implants.

Buttock augmentation with fat transfer in Tunisia is realized at an advantageous price.

Ask for a free online quote to get buttock lipofilling cost Tunisia. 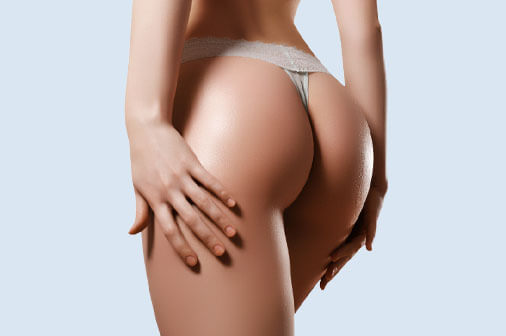 The buttock augmentation with fat transfer is a less invasive surgery. It is performed under general anaesthesia and it takes 2 hours. At first, the surgeon has to start with liposuction for fat collection. The harvested fat is then used for remodeling the buttock. The first step is to perform the liposuction to collect the fat that will be reused for the buttock remodeling.

Buttock augmentation by fat transfer, after the surgery

After the surgery, the patients can expect numbness and discomfort. It is recommended to limit physical activities. Swelling and bruising subside over one month.

Buttocks fat transfer Tunisia results can be immediately seen after the surgery. At first the behind appears bigger because of swelling. But in 3 months there will be a slight decrease in the volume of buttocks because not all fat cells can remain alive after being reinjected.