Lasers have been used for tattoo removal for more than 20 years and we have used a Q-switched ruby laser since 1996. The ruby laser is the acknowledged laser of choice for tattoos removal. The tattoo pigment injected into the lower layers of skin (the dermis) becomes sealed away by a tough collagen ring. It is very difficult to remove the tattoo pigment without affecting the surrounding tissue. The alternatives to laser treatment are, either to physically remove the pigment with the surrounding skin by surgical excision and skin grafting, or chemically destroy the pigment using concentrated salts or acid. In either case the surrounding skin is damaged and significant scarring would be an expected outcome to these, non-laser removal methods. 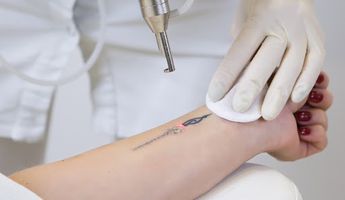 How does it work?

Laser produces extremely short pulses of high-energy, light. This light is absorbed strongly by the tiny particles of tattoo pigment, but not very well by the surrounding skin. The tattoo pigment particles heat up and break down into smaller particles; these minute particles are targeted by the body's own immune system and removed. Because the energy is selectively absorbed by the tattoo pigment, surrounding tissues are not heated up to such a high temperature and there is no lasting damage to the skin.

Laser is also used in other treatments such as : scars treatment.

Can a tattoo be removed in just one treatment?

Only very rarely; some amateur tattoos may disappear after only a small number of treatments; professional tattoos usually take a higher number. There is no such thing as an average tattoo; every tattoo is different and every individual responds differently. As a guide, amateur tattoos can take anywhere from 1-6 treatments; professional tattoos from 8-12, although they may take more than this. Without seeing the tattoo it is impossible to be more accurate and even then, we will only be able to give an estimate.

The amount of pain felt will depend on the type of tattoo, the amount of treatment required and your own pain threshold. Some patients would describe it as no more than uncomfortable, where others will describe it as an elastic band flicked against the skin. The truth is that you will only know how painful you find it until you try it! We can offer advice on pain relief which will be given during your assessment.

After each treatment, the area may blister; this is quite normal and usually resolves in a few days. Once any blisters or crusts have subsided, the skin around the tattoo will look shiny for a number of weeks. Treatment cannot be repeated until your skin has returned to normal; this will usually take from 4 to 5 weeks.